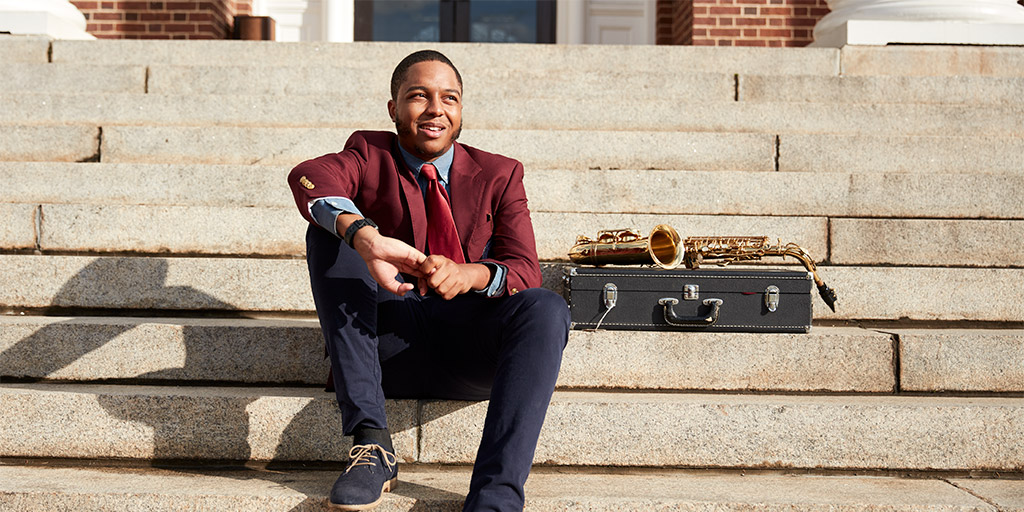 For Ray Hill, music opened the door to his interest in health and wellness. Born and raised in Decatur, Georgia, Ray comes from a family with a passion for music, including a father who plays the saxophone. “I’ve always had an infatuation with the jazz and old-school R&B I heard at home, like The Temptations, The Isley Brothers, Atlantic Starr and The Commodores,” he said.

Ray picked up the family tradition at an early age, starting with piano and then adding alto saxophone and euphonium. In high school, he played in both the concert and marching bands and performed at church and at weddings. After spending two years at Georgia Perimeter College, Ray’s musical talents helped him earn a band scholarship to Morehouse College.

At Morehouse, Ray has played euphonium in the legendary House of Funk marching band. “It’s been a lot of fun,” he said. “At first it was really a challenge, traveling out of state every weekend to perform and then having to jump back into classes first thing Monday, but I learned to get really disciplined with my time, doing homework on the road and in hotels.”

Music also influenced Ray’s academic interests, leading him to explore the connection between music and psychology. At Georgia Perimeter, he researched whether listening to jazz while studying helped students perform better on their final exams (it did). At Morehouse, his interests expanded to larger mental health issues.

One thing Ray noticed at Morehouse is that students often fail to reach out when they could use more mental health support. “I’d like to help raise awareness about mental health in general so people could better understand how it affects their overall health and wellness,” he said.

After he graduates from Morehouse in spring 2016, Ray hopes to pursue a PhD in psychology. “I’m specifically interested in researching how different personality factors influence how people respond to government policies,” he said. “My goal is to understand how we can shape health and wellness policy to succeed with different demographics.”

Ray said being part of the Diverse Scholars Program has been a big inspiration for him. “It’s given me a lot of confidence to go out and explore opportunities in health care,” he said. “The Diverse Scholars Forum was really valuable for helping me connect to other students and mentors. It’s just been a phenomenal experience.” Ray was awarded a scholarship in 2013 to support his undergraduate studies through a partnership between United Health Foundation and the Congressional Black Caucus Foundation, Inc.