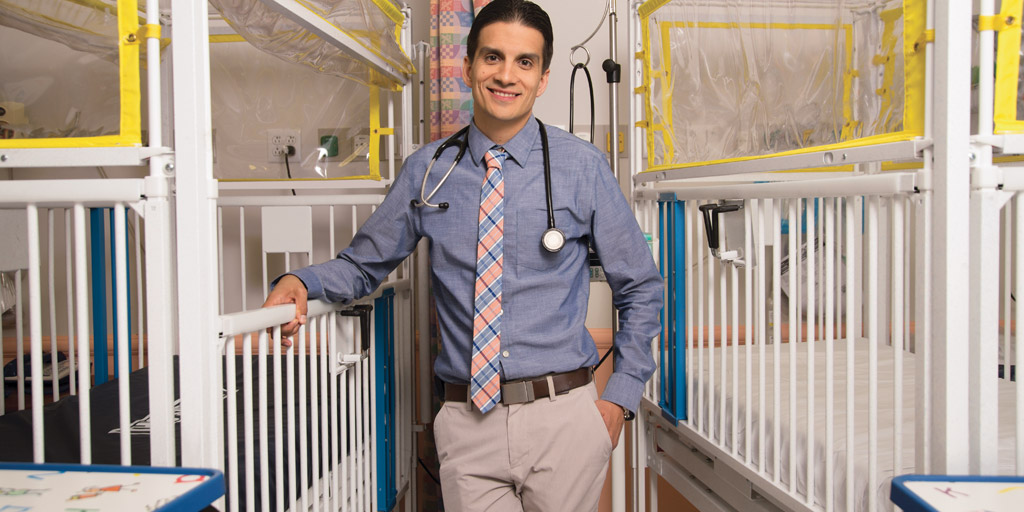 Dr. Noé Romo was born in East Los Angeles, the son of Mexican immigrant parents. His home life was stable, but in his neighborhood, violent gang activity was common. Each summer, he and his family would escape the city to work on his grandfather's farm in rural Mexico.

"My job every day was to herd cattle up and down the mountain," he said. "My experience working on the farm really shaped me as a person and instilled values that I still carry with me to this day."

When Romo reached middle-school age, a teacher urged his parents to enroll him in a gifted program in a more affluent neighborhood. "I was one of just two nonwhite students in the program, so I felt out of place," he said. "But my teacher pulled me aside and told me I was just as smart as the other kids, which helped me feel like I belonged."

Romo attended college at University of California, Riverside, and then traveled across the country to attend Albert Einstein College of Medicine in the Bronx. He received a scholarship from the National Hispanic Health Foundation that was funded by United Health Foundation's Diverse Scholars Initiative. When he attended the Diverse Scholars Initiative Forum in Washington, D.C., he was excited to talk with senators and representatives about health care issues.

"I had never been to D.C. before that and I had never met any national-level legislators," he said. "It made me feel like I had a unique opportunity to be a part of something bigger."

Romo completed a pediatrics residency at Jacobi Medical Center, where he saw that the most serious threat to the health of children in the community was violence. "I would see all these patients, primarily black and Hispanic young men, who would come in after being shot, stabbed or assaulted," he said. "We did a great job of treating their wounds, but I started to question, why aren't we doing anything to break the cycle, like we would for any other disease?"

To help break that cycle, Romo created a community violence prevention program called Stand Up to Violence. "So far, we've responded to over 500 patients who have been shot, stabbed or assaulted," Romo said. "We've been able to mediate over 150 disputes and have reduced the number of shootings by 46 percent."

Romo says that in all his work, he sees the importance of culturally competent care. "Having physicians who not only speak the language of their patients but understand their culture makes a big difference in the quality of health care we can provide," he said.

Romo is committed to using his life experience to help improve health care in the 21st century. "Patients look at you differently when they know you understand," he said. "By helping students of all cultures and backgrounds to join the physician pool, we can have a huge impact not just on individuals, but on our entire health care system."

View a video where Dr. Romo talks about his journey to become a doctor, his first experience in Washington, D.C., and how he started Stand Up to Violence.