Survey: Technology Helps an Unprecedented Number of Americans with Health Benefits Say They Are Prepared For Open Enrollment

Survey: Technology Helps an Unprecedented Number of Americans with Health Benefits Say They Are Prepared For Open Enrollment

An unprecedented number of Americans with health benefits say they are prepared for open enrollment, while an increasing number of people are using online resources to research health symptoms and comparison shop for care, according to a new UnitedHealthcare survey.

These are some of the findings from the third-annual UnitedHealthcare Consumer Sentiment Survey, which examines Americans’ attitudes and opinions about multiple areas of health care, including open enrollment preparedness, technology trends and quality and cost transparency. Key findings include:

“This survey shows people are embracing technology as an important resource to improve their health and more effectively navigate the health system,” said Rebecca Madsen, chief consumer officer of UnitedHealthcare. “By creating resources to help simplify the health system and provide more effective clinical interventions, UnitedHealthcare is responding to people’s needs on their health care journeys, and we hope this data is helpful to others involved in supporting the health of all Americans.”

Open Enrollment Preparedness and Preferences
When it comes to time spent researching health benefits during open enrollment, 42 percent of respondents said they devote less than one hour to the process; 29 percent spent between one and three hours; and 20 percent said more than three hours.  Most insured respondents (67 percent) said they research if the doctors from whom they regularly receive care are in-network for the health plan they intend to select.

Many Americans with health benefits affirmed the importance of ancillary benefits, such as vision and dental plans. Most (80 percent) said having vision and dental benefit options is “important” during open enrollment. Full-time employees showed even more interest, with 85 percent of those respondents saying vision and dental coverage is important. That’s likely because a large percentage of people recognize the link between oral and overall health: 85 percent of survey respondents correctly recognized that oral health can affect overall health, including 53 percent saying the link was “significant.”

In regard to eye health, 39 percent of respondents said the extended use of smartphones, tablets or computers had caused them to experience symptoms associated with digital eye strain, including sore or dry eyes, headache, or sore neck, shoulder or back. Among people experiencing this, 55 percent said they responded by stopping or limiting their use of digital devices; 14 percent said they started using blue-light blocking technology for either their device or eyewear; and 28 percent said they made no changes.

Technology and Transparency Trends
Technology continues to play an increasingly important role in how people research health care options. More than one-third of respondents (36 percent) said they have used the internet or mobile apps during the last year to compare the quality and cost of medical services. That’s more than double from 14 percent in 2012 (according to another UnitedHealthcare study). Among all comparison shoppers, 84 percent described the process as “very helpful” or “somewhat helpful,” up 4 percentage points from a year ago.

One in 10 comparison shoppers said doing so prompted them to change both the health care provider and facility for the researched service. For people who said the comparison-shopping experience was not helpful, 42 percent said the estimates were confusing or not easy to understand; 26 percent said the results lacked key quality or cost information; and 7 percent said they were not customized for their health plan.

Meanwhile, 72 percent of respondents said there is no connection between the cost and quality of medical services, and some studies have shown little correspondence between higher-priced health care providers and improved health outcomes.

About the Survey
The 2018 UnitedHealthcare Consumer Sentiment Survey was conducted Aug. 2-5 using Engine’s Telephone CARAVAN® survey among a landline and cell phone probability sample of 1,003 U.S. adults age 18 and older. The margin of error was plus or minus 3 percent at the 95 percent confidence level. Supplemental interviewing, also among probability samples, was conducted Aug. 9-12.

UnitedHealthcare is dedicated to helping people live healthier lives and making the health system work better for everyone by simplifying the health care experience, meeting consumer health and wellness needs, and sustaining trusted relationships with care providers. In the United States, UnitedHealthcare offers the full spectrum of health benefit programs for individuals, employers, and Medicare and Medicaid beneficiaries, and contracts directly with more than 1.2 million physicians and care professionals, and 6,500 hospitals and other care facilities nationwide. The company also provides health benefits and delivers care to people through owned and operated health care facilities in South America. UnitedHealthcare is one of the businesses of UnitedHealth Group (NYSE: UNH), a diversified health care company. For more information, visit UnitedHealthcare at www.uhc.com or follow @UHC on Twitter. 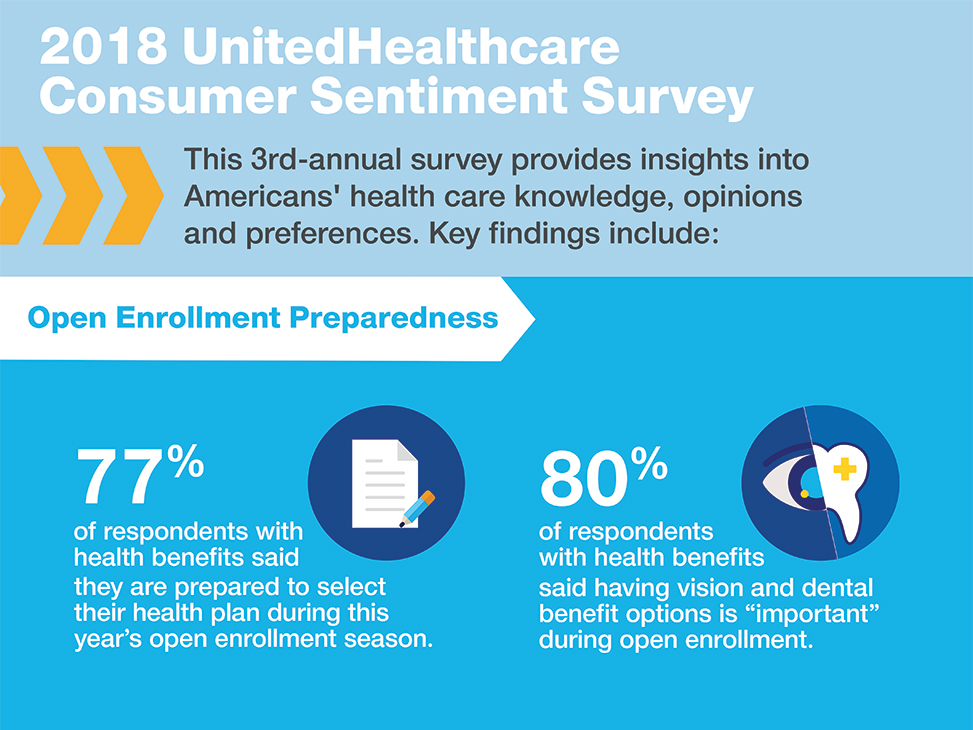