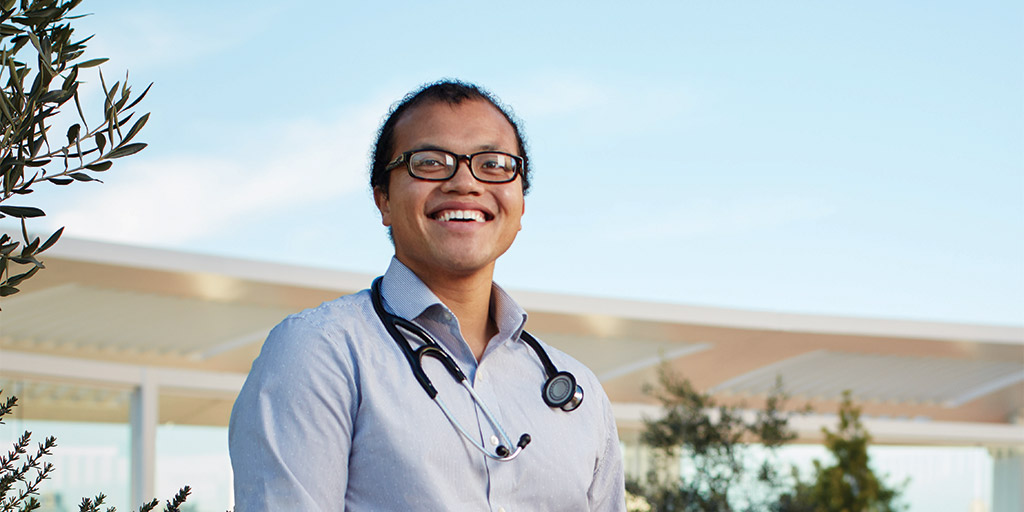 From a young age, Kenji Taylor was aware of cultural differences. Growing up in a single-parent, African-American-Japanese family, Kenji found it challenging to fit in socially in Meadville, Pennsylvania, where he was raised. “There were no Japanese residents at all, so we probably fit in more with the African-American community, but not completely,” said Kenji. “There really weren’t any role models for us.”.

Life changed dramatically when Kenji earned a full scholarship to Brown University. “It was a huge shift,” said Kenji. “Culturally it was very diverse, and socioeconomically it was a total culture shock.” He chose a double major in East Asian studies and neuroscience so he could pursue his interests in both Japanese culture and medicine.

During his junior year, Kenji studied abroad in Tokyo. While there, he was surprised to see how ethnic minorities in Japan were prevented from accessing basic social services, especially health care. He also discovered an interest in business. “I was able to work with the U.S. Chamber of Commerce and realized that being bicultural and bilingual was an asset I hadn’t fully appreciated,” he said. When he returned to Brown, he stayed for a fifth year, earning a master’s degree in innovation management and entrepreneurial engineering.

After graduating, Kenji began a managerial training program with The Capital Group Companies, working in Los Angeles, London and Tokyo. While in LA, Kenji had an experience that convinced him to go to medical school. “I volunteered with the board of Clínica Romero, a free health care clinic that serves Mexican immigrants in East LA,” he said. “I realized as a physician I could use science to help individuals from different backgrounds and use my business experience to affect health at a population level.”

Kenji enrolled in the Perelman School of Medicine at the University of Pennsylvania. While there, he managed the Cut Hypertension program, in which medical students visit African-American barbershops to provide blood pressure screenings. The program had special meaning for Kenji because his African-American father, uninsured and out of regular medical care, died of a heart attack in 2008. “Being able to go out to the barbershop is a great way to not only start a conversation about hypertension, but also show African-American men that they can have trusting relationships with health care providers,” he said.

Kenji is now doing his residency in family medicine at the University of California, San Francisco, San Francisco General Hospital. “In family medicine, you work with all comers, delivering babies, treating children, helping old people,” he said. “You’re very much embedded in the community.”

Kenji says the Diverse Scholars Initiative has been a huge help for him in pursuing his goals. “It’s been immensely helpful to have the financial support, but also the mentorship opportunities,” he said. “It’s so powerful to have people who inspire you and believe in your ability to do great things.” Kenji was awarded a scholarship in 2014 and 2015 to support his studies through a partnership between United Health Foundation and National Medical Fellowships.