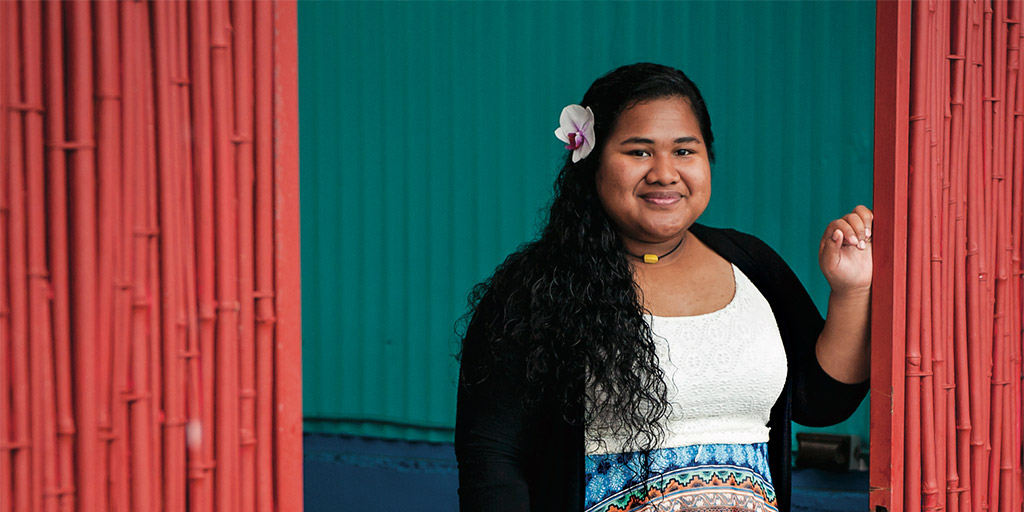 Felicia Andrew says she’s used to explaining where she comes from. “Not a lot of people have heard of Palau,” she said. “Very few can find it on a map.”

Located in the western Pacific Ocean, Palau is a country spread out across 250 islands with an approximate population of 21,000. Felicia grew up on Koror, the most populous island, but she identifies strongly with the outer islands where her family originally came from. She grew up speaking Tobian and Sonsorolese in her home, “but in school I always spoke English and Palauan,” she said.

When Felicia enrolled at the University of Hawaii at Hilo, she became a first-generation college student — a big step for her. Her flight to Hawaii was the first time she had ever been out of Palau — and it was her first time on an airplane.

A special orientation program for Pacific Islander students helped Felicia get off to a good start. “The orientation sessions helped us understand what was expected from us, how to manage our time, how to get financial help and more,” she said. “It really helped me feel confident on the first day of school.”

Felicia’s decision to enroll in the pre-nursing program came because of an experience in high school. “My school had a program that helped you get on-the-job work experience, so I chose to work as a nursing assistant and was placed in a hospital. I loved interacting with the patients, learning medical terms and using all the medical equipment.”

Felicia has been actively involved in health and wellness education at her university. She’s a peer health educator for the university’s Student Health & Wellness Program, and she works to raise awareness about mental health issues like alcohol abuse, sexual assault, depression and suicide. “As Pacific Islanders, we are too hesitant to ask for help,” she said. “I tell people that counseling is important and it’s OK to reach out for help with your personal life.”

Being a part of the Diverse Scholars Program has helped Felicia to believe in herself and work hard to pursue her goals. She was especially inspired by her experience at the annual APIASF Higher Education Summit. “I was so happy to get to go to Washington, D.C., and hear from students who had come to America to get their education, just like me,” she said. “I could really relate and it helped to inspire and motivate me.”

Despite the challenging classes, Felicia is focused on her goal of obtaining her nursing degree and returning to Palau. “I think the world needs more nurses,” she said.

Felicia was awarded a three-year scholarship in 2014 to support her undergraduate studies through a partnership between United Health Foundation and the Asian and Pacific Islander American Scholarship Fund.