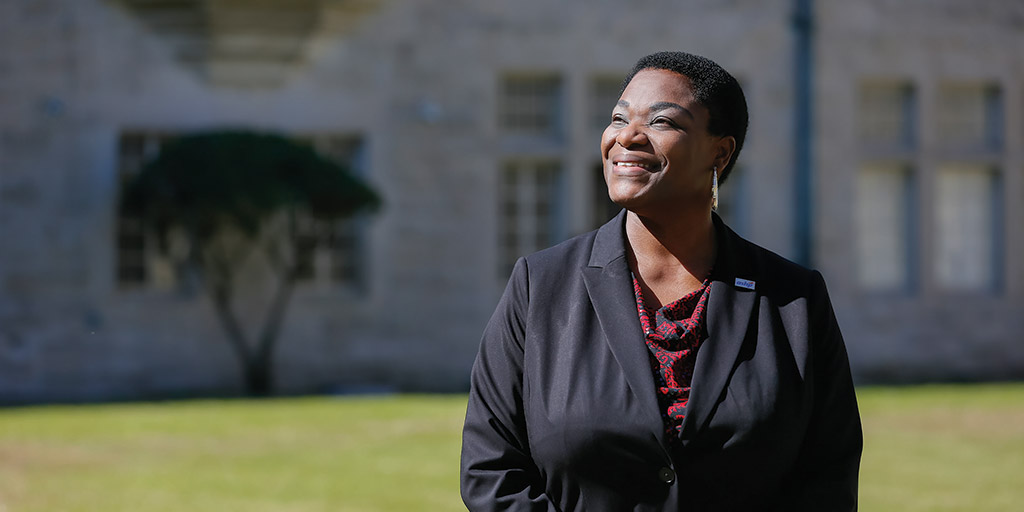 Evelyn Ambush became interested in pharmacy at a very young age. “In Lagos, Nigeria, where I grew up, my parents would make a concoction of herbs whenever we got sick,” she said. “They would go into the forest and they knew just which leaves to select according to our illness. They would cook it all up — then we would drink it and feel so much better!”

When Evelyn was just 10 years old, her parents sent her to live with her uncle, a pharmacist who lived in Ondo, Nigeria. “After school I would sit and watch him, and I saw all the people who came to him for medications,” she recalled. “They would all say, ‘Thank you so much — now I’m feeling so much better.’ I knew I wanted to help people the way he did.”

Evelyn had always dreamed of going to college in the United States. “I had a map of America in my bedroom, and I would always imagine myself there,” she said. So after graduating from high school, she left Nigeria in 1984 to join a friend in Chicago. Her plan was to attend a community college to complete her basic requirements before beginning her pharmacy studies. However, she soon received a call from home with tragic news: Her father had died of a stroke.

“The stroke was a complication of his diabetes,” Evelyn said. “His death put an end to my studies because I needed to get a job to help support my mother and my siblings.” Evelyn hated the cold weather in Chicago, so she moved to Houston, Texas, and got a job working at an Eckerd drugstore.

She worked at the store for several years, supporting her family as her siblings grew into adulthood. In 1996, her mother moved to the U.S. to join Evelyn. And in 2009, Evelyn decided she could finally go back to school to study pharmacy. She received two associate degrees with high honors in chemistry and health sciences with a concentration in respiratory therapy from Perimeter College – Georgia State University. She later applied and was accepted to Xavier University College of Pharmacy in New Orleans.

After waiting so many years, Evelyn is thrilled to be finally graduating in 2016 with her pharmacy degree. While at Xavier, she especially enjoyed her research on diabetes treatment and her internship at Children’s Hospital of New Orleans. Her plan is to continue her studies in postgraduate pharmacy residency programs to become an ambulatory pharmacist, which would allow her to work closely with patients as part of a clinical team.

Evelyn is deeply grateful to United Health Foundation for helping her achieve her long-delayed life goal. “It’s always been my dream to become a pharmacist,” she said. “But I tell people that when God gives you a dream, even when you are not chasing it, it will chase you down. And this one did!” Evelyn was awarded a scholarship in 2014 and 2015 to support her studies through a partnership between United Health Foundation and United Negro College Fund.